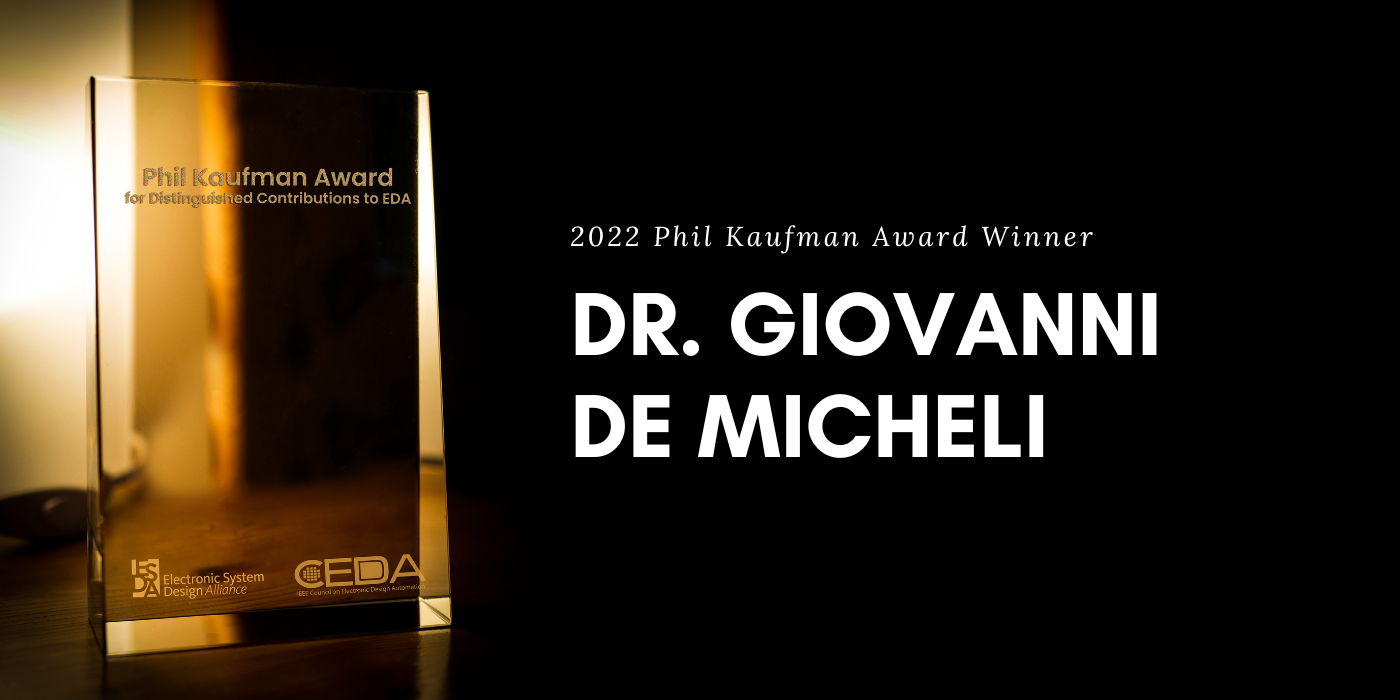 MILPITAS, Calif. –– September 28, 2022 –– Dr. Giovanni De Micheli, Professor of Electrical Engineering and Computer Science in the Institute of Electrical Engineering (IEL) at the School of Engineering, as well as at the School of Computer and Communication Sciences, of the École Polytechnique Fédérale de Lausanne (EPFL) in Lausanne, Switzerland, has been honored with the 2022 Phil Kaufman Award for Distinguished Contributions to Electronic System Design. The award is presented annually by the Electronic System Design Alliance (ESD Alliance), a SEMI Technology Community, and the Institute of Electrical and Electronics Engineers (IEEE) Council on Electronic Design Automation (CEDA).

Dr. De Micheli was recognized for his extensive contributions to electronic design automation (EDA). His EDA tools and methodologies research has helped drive significant advances in the academic field of design automation and made a lasting impact on the industry through their incorporation into commercial EDA solutions. Notably, he developed multiple technologies while inspiring his students, university researchers and engineers in the industry. His work has expanded the fields of high-level synthesis, logic synthesis, and Network-on-Chip (NoC) for more than 30 years.

“Professor De Micheli, or Nanni to many of us who’ve been driving our industry forward for decades, stands as a relentless advocate for our field,” said Aart de Geus, Chairman and CEO of Synopsys. “While many predicted our industry was fully matured, he remained focused and creative, be it with the encoding of finite-state machines combined with logic minimization or solving the cell-library mapping problem with Boolean matching. I am not alone when I express my appreciation to Nanni for advancing the field, but most important, for continuing to add findings that keep our profession fresh and exciting!”

“For the over three decades that I have known Professor De Micheli, he has established himself as a true force in the EDA community,” said Dr. Patrick Groeneveld, past chair of the Design Automation Conference (DAC). “His key technical contributions lie in the areas of logic synthesis, hardware-software co-design, NoC design, and physical synthesis.”

“Dr. De Micheli has been a stalwart innovator and supporter of EDA with numerous and lasting contributions, and certainly he well deserves this honor,” said Gi-Joon Nam, President of the IEEE Council on EDA.
“On behalf of the ESD Alliance, I congratulate Professor De Micheli on receiving the 2022 Phil Kaufman award,” said Simon Segars, ESD Alliance Chairman. “The industry would not be where it is today without his groundbreaking research, which was often years ahead of its time. His impact on the industry is well-recognized and celebrated with this distinguished award.”

Dr. Giovanni De Micheli is a research scientist in electronics and computer science credited with inventing the NoC design automation paradigm and creating EDA algorithms and design tools. Before serving as Professor and Director of the Integrated Systems Laboratory at EPFL, he was a Professor of Electrical Engineering at Stanford University. He was Director of the IEL at EPFL from 2008 to 2019 and served as program leader of the Swiss Federal Nano-Tera.ch program.

He holds a Nuclear Engineering degree from Politecnico di Milano, and a Master of Science and Ph.D. degrees in Electrical Engineering and Computer Science from the University of California, Berkeley.

Professor De Micheli is a Fellow of the Association for Computing Machinery (ACM), the American Association for the Advancement of Science (AAAS), and IEEE; a member of the Academia Europaea; and an International Honorary member of the American Academy of Arts and Sciences. His current research interests include design technologies for integrated circuits and systems, including synthesis for emerging technologies. He is also interested in heterogeneous platform design for electrical components and biosensors, as well as in-data processing of biomedical information.

He authored the textbook Synthesis and Optimization of Digital Circuits and co-authored and/or co-edited 10 other books and more than 900 technical articles. His citation h-index is above 100 according to Google Scholar. He is a member of the Scientific Advisory Boards of imec Leuven and STMicroelectronics.

He received the Golden Jubilee Medal for outstanding contributions to the IEEE CAS Society, the D. Pederson Award for best paper on IEEE Transactions on Computer-Aided Design (CAD)/Integrated Computer-Aided System (ICAS), and best paper awards at events including DAC; Design, Automation and Test in Europe (DATE); Nanoarch; and Mobihealth.

In addition, he served as Division 1 Director of IEEE, co-founder and President-Elect of the IEEE Council on EDA, President of the IEEE CAS Society, and Editor-in-Chief of the IEEE Transactions on CAD/ICAS. He has also chaired the following technical conferences:  Memocode; DAC; DATE; pHealth; VLSI SoC; and IEEE International Conference on Computer Design (ICCD).

About the Phil Kaufman Award
The Phil Kaufman Award honors individuals who have had a demonstrable impact on the field of electronic system design through technology innovations, education/mentoring, or business or industry leadership. The award was established as a tribute to Phil Kaufman, the late industry pioneer who turned innovative technologies into commercial businesses that have benefited electronic designers. The 2021 recipient was Dr. Anirudh Devgan, President and CEO of Cadence Design Systems.