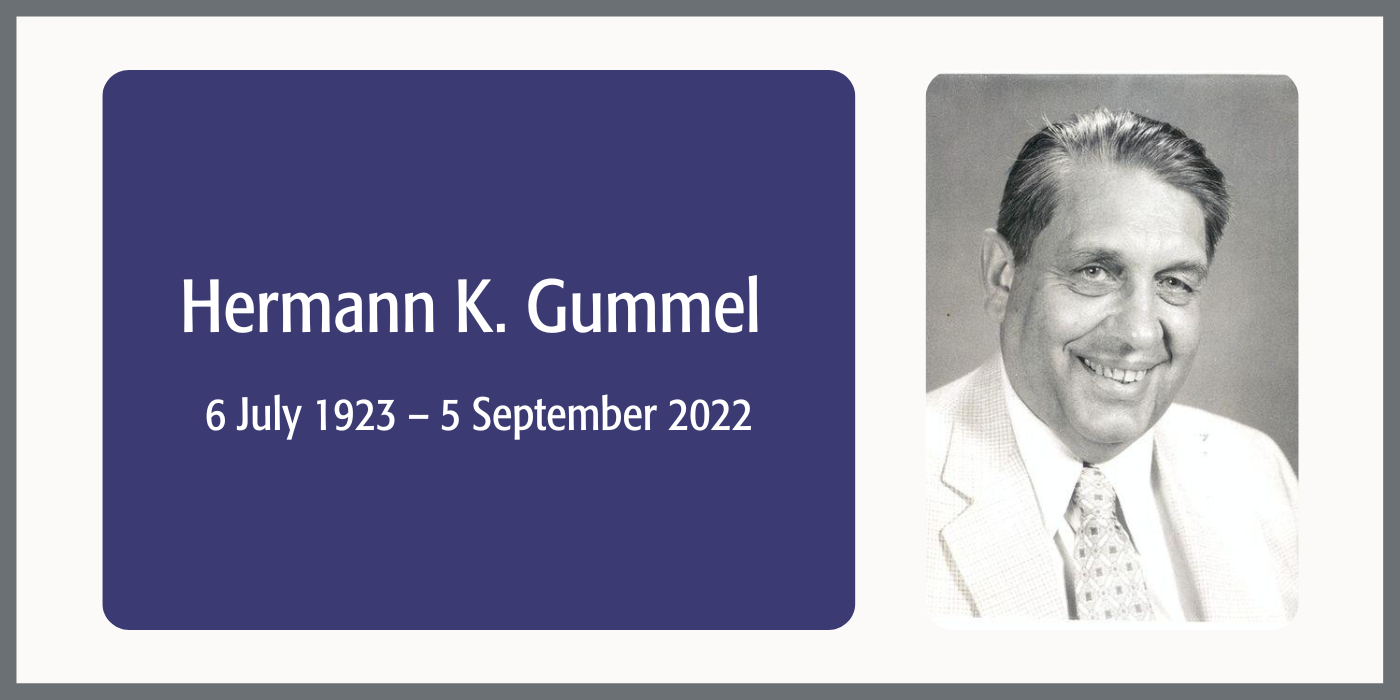 Beloved Hermann Gummel passed away on Monday, 5 September at 99 years old, surrounded by his ‘dearly ones’. Hermann was born on 6 July 1923 in Hannover, Germany to Hans and Charlotte Gummel, the middle brother of an older sister, Bärbel, and younger brother, Achi. After graduating high school, Herman was enlisted as a radio operator for the German army in World War II. He was wounded and taken prisoner during the Normandy Landing (DDay) and ultimately sent to a hospital in Scotland. Throughout his life, Hermann was deeply grateful for the compassionate care of the doctors and staff there, who saved his leg from amputation.

Hermann’s intellectual aptitude and interest in academia would define the trajectory of his life. After the war, he enrolled in the University of Marburg as a wounded veteran, where he fell in love with, and later married, his wife Erika Reich. They were married for 64 years before her passing in 2016.

In addition to love, academia also took Hermann to new land. Hermann was awarded a Fullbright scholarship to Syracuse University, marking the beginning of a new life that he and Erica would forge together in the United States. Hermann obtained his doctorate in Physics, during which he also became a father for the first time to his daughter Monica in 1953. Hermann and Erica’s second daughter, Margaret was born five years later in 1958.

After completing his Doctorate, the family moved to Plainfield, NJ in 1957 and Hermann began a lifelong career working at Bell Laboratories. Hermann worked as a Director at “Mother Bell” for 30 years, then as a consultant for an additional 10+ years after his “retirement”. Throughout this time, the family lived in North Plainfield (1960-1976), then Berkeley Heights (1976-2005), and finally, at the Cedar Crest Senior Living Community in northern New Jersey.

Within the scientific community, Hermann is considered a pioneer in the semiconductor industry, leaving behind a distinguished legacy in the field of design technology for integrated electronics. He was a scientific mentor, leader, and visionary for many in the field. Awarded the prestigious Phil Kaufman award and known for the ‘Gummel Number’, the Gummel-Poon Model, and numerous other technical achievements. Within his family, he continues to be simply and lovingly, “Dad” and “Opa”.

Hermann is survived and loved by both his children, Monica and Margi, his grandchildren, Tracy and Pammy, as well as his great-grandchildren, Marco and Nico. The scientific community will remember Hermann for his technical contributions. His loved ones will remember him for his integrity, boundless intellectual curiosity and discipline, his loyalty, and a heart that was endlessly grateful for the life he lived and those he loved.